Here is my new studio, clean & tidy for the moment, ready to create…

This stained glass sun catcher was inspired by the craftsmanship of Navajo Indians. It can be seen in its reduced form of souvenirs for tourists in the Information Centers of the Monument Valley National Park or at the Navajo Village Heritage Center in Page near Powell Lake in Utah. But their colors are offered free of charge across the landscape of Arizona and Utah.

The “cartoon” drawing was created with AutoSketch. And first layer of painting is already in the kiln…

In the center of the Batory district you can visit beautifully renovated the art nouveau residence of the director of the local steelworks Emil Marx. The brick building was built in 1906, and its builder was known entrepreneur, Ignatz Gruenfeld. The interior of the building is particularly impressive: the hall covered with woodwork and its two-storey high stained glass, mainly representing floral motifs, created by Ryszard Schlein.

“The Raven” enters the realization phase. I make the plan of lead and glass cuts in SketchUp:

Then I cut the glass as designed on the plan :

The next step involves going back and forth between the paint table and the kiln. First I paint the contours with the black line and I fix them in the kiln, and then I create the gradients of clouds:

Finally it is time to mount all glass parts in lead profiles. I hope to be able to show the panel ready soon.

Influenced by the incessant rain for several weeks, I begin on this May 8, 2017 a series of stained glass windows entitled “Autumn in Krakow with Ravens”… Here is the first pastel sketch:

I would like to present my latest project “Little Window 01” (number one let hope that other windows will follow). The wooden frame has been saved from destroyed house in Lower Silesia (Western Poland)…

The stained glass panel is influenced, like many in this gallery, by works of Frank Lloyd Wright.

The name of the lamp is influenced by the date of its production. The base, found at the flea market in Krakow was manufactured in early eighties of 20th century in Poland, the period when the country was called People’s Republic of Poland, acronyme “PRL” in Polish.

The shade made recently in my workshop is close in its expression to a bit “kitsch” design of the 70s. The red “peas” are fused with the white plate in my kiln in the temperature of 790C.

Then the glass elements have been assembled in Tiffany technique. 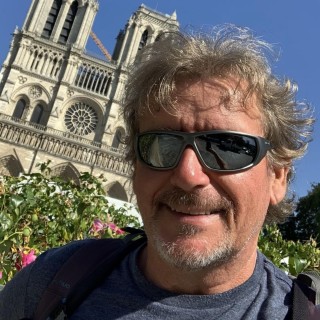